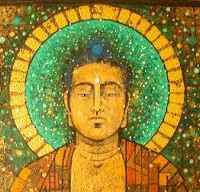 This celebration is called Vesak being the name of the month in the Indian calendar. As we recall the Buddha and his Enlightenment, we are immediately reminded of the unique and most profound knowledge and insight which arose in him on the night of his Enlightenment. This coincided with three important events which took place, corresponding to the three watches or periods of the night.During the first watch of the night, when his mind was calm, clear and purified, light arose in him, knowledge and insight arose. He saw his previous lives, at first one, then two, three up to five, then multiples of them .. . ten, twenty, thirty to fifty. Then 100, 1000 and so on…. As he went on with his practice, during the second watch of the night, he saw how beings die and are reborn, depending on their Karma, how they disappear and reappear from one form to another, from one plane of existence to another. Then during the final watch of the night, he saw the arising and cessation of all phenomena, mental and physical. He saw how things arose dependent on causes and conditions. This led him to perceive the arising and cessation of suffering and all forms of unsatisfactoriness paving the way for the eradication of all taints of cravings. With the complete cessation of craving, his mind was completely liberated. He attained to Full Enlightenment. The realisation dawned in him together with all psychic powers. This wisdom and light that flashed and radiated under the historic Bodhi Tree at Buddha Gaya in the district of Bihar in Northern India, more than 2500 years ago, is of great significance to human destiny. It illuminated the way by which mankind could cross, from a world of superstition, or hatred and fear, to a new world of light, of true love and happiness.

The First Noble Truth is the Truth of Dukkha which has been generally translated as ’suffering’. But the term Dukkha, which represents the Buddha’s view of life and the world, has a deeper philosophical meaning. Birth, old age, sickness and death are universal. All beings are subject to this unsatisfactoriness. Separation from beloved ones and pleasant conditions, association with unpleasant persons and conditions, and not getting what one desires – these are also sources of suffering and unsatisfactoriness. The Buddha summarises Dukkha in what is known as the Five Grasping Aggregates.

Herein, lies the deeper philosophical meaning of Dukkha for it encompasses the whole state of being or existence.

Our life or the whole process of living is seen as a flux of energy comprising of the Five aggregates, namely the Aggregate of Form or the Physical process, Feeling, Perception, Mental Formation, and Consciousness. These are usually classified as mental and physical processes, which are constantly in a state of flux or change.

When we train our minds to observe the functioning of mental and physical processes we will realise the true nature of our lives. We will see how it is subject to change and unsatisfactoriness. And as such, there is no real substance or entity or Self which we can cling to as ‘I’, ‘my’ or ‘mine’.

When we become aware of the unsatisfactory nature of life, we would naturally want to get out from such a state. It is at this point that we begin to seriously question ourselves about the meaning and purpose of life. This will lead us to seek the Truth with regards to the true nature of existence and the knowledge to overcome unsatisfactoriness.

From the Buddhist point of view, therefore, the purpose of life is to put an end to suffering and all other forms of unsatisfactoriness – to realise peace and real happiness. Such is the significance of the understanding and the realisation of the First Noble Truth.

The Second Noble Truth explains the Origin or Cause of suffering. Tanha or craving is the universal cause of suffering. It includes not only desire for sensual pleasures, wealth and power, but also attachment to ideas’, views, opinions, concepts, and beliefs. It is the lust for flesh, the lust for continued existence (or eternalism) in the sensual realms of existence, as well as the realms of form and the formless realms. And there is also the lust and craving for non-existence (or nihilism). These are all different Forms of selfishness, desiring things for oneself, even at the expense of others.

Not realizing the true nature of one’s Self, one clings to things which are impermanent, changeable and perishable. The failure to satisfy one’s desires through these things; causes disappointment and suffering.

Craving is a powerful mental force present in all of us. It is the root cause of our sufferings. It is this craving which binds us in Samsara – the repeated cycle of birth and` death.

The Fourth Noble Truth explains the Path or the Way which leads to the cessation of suffering. It is called the Noble Eightfold Path.

The Noble Eightfold path avoids the extremes of self-indulgence on one hand and self-torture on the other. It consists of Right Understanding, Right Thought, Right Speech, Right Action, Right Livelihood, Right Effort, Right Mindfulness and Right Concentration.

These path factors may be summarised into 3 stages of training, involving morality, mental culture and wisdom.

The concentrated and cultured mind is a contemplative and analytical mind. It is capable of seeing cause and effect, and the true nature of existence, thus paving the way for wisdom and insight.

The message of the Buddha stands today as unaffected by time and the expansion of knowledge as when they were first enunciated.

No matter to what lengths increased scientific knowledge can extend man’s mental horizon, there is room for the acceptance and assimilation for further discovery within -the framework of the teachings of the Buddha.

The teaching of the Buddha is open to all to see and judge for themselves. The universality of the teachings of the Buddha has led one of the world’s greatest scientists, Albert Einstein to declare that ‘if there is any religion that could cope with modern scientific needs, it would be Buddhism’

The teaching of the Buddha became a great civilising force wherever it went. It appeals to reason and freedom of thought, recognising the dignity and potentiality of the human mind. It calls for equality, fraternity and understanding, exhorting its followers to avoid evil, to do good and to purify their minds.

Realising the transient nature of life and all worldly phenomena, the Buddha has advised us to work out our deliverance with heedfulness, as ‘heedfulness is the path to the deathless’.

His clear and profound teachings on the cultivation of heedfulness otherwise known as Satipatthana or the Four Foundations of Mindfulness, is the path for the purification of beings – for the overcoming of sorrows and lamentation, for the destruction of all mental and physical sufferings, for the attainment of insight and knowledge and for the realisation of Nibbana. This has been verified by his disciples. It is therefore a path, a technique which may be verified by all irrespective of caste, colour or creed.