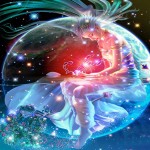 This is a season of eclipses. It’s common to have a pair of them in a month, one lunar and one solar, but we are now in the midst of a group of three of them: a Solar Eclipse on June 1, Lunar Eclipse June 15, Solar Eclipse July 1. The general meaning of eclipses is change because these events break the regular lunar patterns, throwing us off track and pointing us in different directions.

Eclipses occur when a New or Full Moon is close to the Moon’s Nodes. The nodes are the two opposing points where the Moon’s orbit around the Earth crosses the Earth’s orbit around the Sun. Indian Astrologers call them the Dragon’s Head and Tail; we call them the North and South Nodes of the Moon. They move backwards through the 12 signs of the zodiac every 18.6 years.

Most astrologers believe that the South Node of the Moon represents old, familiar habits, either a past life or just an instinctive response to this one; those repetitive patterns, ruts, inner dialogues that depress our joy in life or keep us safe in the known. The North Node represents a new direction, a place of growth where we develop ourselves, sometimes awkward to express because it’s unfamiliar, the exact opposite of the comfortable qualities of the South Node.

The Moon’s South Node, the Ketu or Dragon’s Tail, is in diverse Gemini where hunger for information and attraction to a million and one ideas keep us talking, even when we have nothing to say. Its presence here is good for being adaptable and open-minded yet an unwillingness to take a stand and turn words into action is a weakness.

The integrating power of the Rahu – North Node in Sagittarius comes from taking the risk of being honest. Real honesty is not about what we say to others, it begins within by turning over the rocks of denial and tearing down the walls of rationalization we have built up to keep ourselves from recognizing inconvenient truths. Telling others how to live their lives and hiding behind political or religious slogans is not the highest side of Sagittarius. Yet being brave enough to continue seeking the truth within is courageous and noble work that enriches us all.