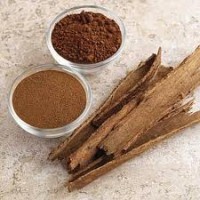 The best spice to be used during a change of season as Cinnamon as it:

Cinnamon is effective in controlling blood sugar levels. A 2003 Diabetes Care medical journal published test describes the results of subjects taking 1, 3, or 6 grams of cinnamon per day in capsule form (the equivalent of approx 1/4 to 1 teaspoon of cinnamon).All 3 amounts of cinnamon groups showed reduced fasting blood glucose levels by 18-29% after 40 days.

Maybe a cinnamon capsule before each meal can help control appetite. Ishta New York guru, Alan Finger, already in the early 1970s, recommended a teaspoon of cinnamon powder each morning during change of season to stimulate the immune system and improve resistance to seasonal influenza, colds.
Always be discerning; should you have allergies, consult your doctor.Latin names: Cinnamomum zeylanicum, Cinnamomum cassia

Cinnamon is a small tree that grows in India, Sri Lanka, Indonesia, Brazil, Vietnam, and Egypt. It’s one of the oldest known spices. Preparation: The bark of the cinnamon tree is dried and rolled into cinnamon sticks, also called quills. Cinnamon can also be dried and ground into a powder.The characteristic flavor and aroma of cinnamon comes from a compound in the essential oil of the bark called cinnamonaldehyde.

Ingredients for a quick & delicious tea: