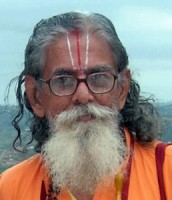 Universal Message of the Saints of the World
A renowned English poet, Longfellow said:

“Lives of great men all remind us
We can make our lives sublime,
And, departing, leave behind us
Footprints in the sands of time.”

So it is for us to follow the footsteps of the great.

“Let all your activities be so directed as to lead you to one common goal. Let there be conferences held among you in a common tongue. Let also your minds be all of one accord in acquiring knowledge of the various lores. In short, do as the enlightened before you in all the ages did, performing their tacks in life in co-operation and harmony, with minds in full agreement for the acquisition of knowledge. Like the ancient seers, also worship me alone who am the only real object of your devotion.”

The hymn of unity has come down from the Rig Veda to the present day to make Hindu Dharma the universal religion of the world. That the Ultimate reality is that which cannot be reached by the mind and that from which words return was emphatically declared in the Hymn of Creation:

“Who knows for certain? Who shall here declare it?”

“The flower must shed it’s petals for the sake of fruition, the fruit must drop for the re-birth of the tree. The child leaves the refuge of the womb in order to achieve the further growth of the body and mind in which consists the whole of the child life; next, the soul has to come out this self-contained stage into the fuller life, which has varied relations with kinsman and neighbour, together with whom it forms a larger body; lastly its experiences, the soul now leaves the narrower life for the universal life, to which it dedicates its accumulated wisdom and itself enters into relations with Eternal Life, so that, when finally the decaying body has come to the very end of its tether, the soul views Its breaking away quite simply and without regret, in the expectation of its own entry into the Infinite.

“From individual body to community, from community to universe, from universe to infinity – this is the souls normal progress.” Tagore’s immense hope in the triumphant march of humanity to this ultimate goal finds its finest expression when he sings:

“The Great One comes,
Sending shivers across the dust of the Earth.
In the heavens sounds the trumpet,
In the world of man drums of victory are heard,
The Hour has arrived of the Great Birth.
The gates of Night’s Fortress
Crumble in the dust-
On the crest of awakening dawn
Assurances of a new life
Proclaims “”Fear,not”
The great sky resounds with hallelujahs of victory
To the Coming of Man.”