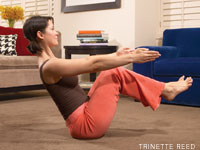 An eight-week yoga intervention is associated with improvements in pain, psychological functioning and mindfulness, and changes in cortisol levels in women with fibromyalgia: 22   patients attended 75 minute yoga classes twice a week for 8 weeks were tested &

Objectives: Fibromyalgia (FM) is a chronic condition characterized by widespread musculoskeletal pain, fatigue, depression, and hypocortisolism. To date, published studies have not investigated the effects of yoga on cortisol in FM. This pilot study used a time series design to evaluate pain, psychological variables, mindfulness, and cortisol in women with FM before and after a yoga intervention.

Discussion: The results suggest that a yoga intervention may reduce pain and catastrophizing, increase acceptance and mindfulness, and alter total cortisol levels in women with FM. The changes in mindfulness and cortisol levels may provide preliminary evidence for mechanisms of a yoga program for women with FM. Future studies should use an RCT design with a larger sample size.